This bank holiday Monday the Zetland staged their meeting at Witton Castle, a huge crowd turned out to enjoy a six race card with the very talented Steely Addition romping home in the Men’s Open and taking centre stage on the day. The ground had been watered on the run up to the meeting and organisers had done a fantastic job in producing excellent and safe ground.

The Men’s Open saw an easy victory from the Chris Dawson trained Steely Addition and make it five wins this season from six runs and no doubt bigger and better things are on the horizon. Piloted by brother John, the pair easily went clear near the finish for an easy five length victory, a Perth Hunter Chase may now be on the agenda and if all goes well, a trip to Stratford towards the end of the season could be the culmination of what’s been a fantastic season for this son of Craigsteel. Ravished ran a galant race in second under Tom Greenwood, however at the age of 14 he doesn’t look the force of old.

The Ladies Open saw a good tussle between two promising young lady riders, Lois Teal took the mount aboard the Cherry Coward trained Royal Chant; deputising for an injured Rosie Howarth, the pair tracked the leaders till turning for home, however Nortonthorpelegend and Hester Hardy pushed the winner all the way to the line after making a good portion of the running for his young rider who looks sure to be in the winner’s spot before long and came home two lengths back in second. Busy Street was running a good race under Pippa Brown and held the lead when running out three from home and could have a say in the near future.

The Open Maiden had the largest field of the day and saw rider turned trainer Ross Wilson record his first winner courtesy of Inviction, however as Ross had two runners in the race Nick Orpwood took the mount and the pair made all the running to score by an eased down 10 lengths. Inviction has shown improved form since the better ground has arrived but his impressive display was still a slight surprise to his trainer “he likes this better ground, but we haven’t changed much and he’s won that easily” said a baffled Ross who purchased the 7yo out of Joseph O’brien’s yard at last years Goffs September sale for £2500. Second place went to Red Opium and Joe Wright who out of Poppy day looks to want a good test of stamina, whilst El Tornado was further back in third under John Dawson.

Ross Wilson although missing out on his own horse, still finished the day with a winner aboard Whostosay who was quickly turned out again after his victory at Easingwold the week before. As they did in his Maiden the pair led for the whole race and easily came clear after the last to win cosily and beat White Church and Joe Wright in second. Although lightly raced for a 10yo it has taken till now for things to fall right for this enthusiastic son of Witness Box and could continue his progression if conditions remain dry.

Another dominant display came in the opening Conditions race with Vent d’Automne and Lily Frank, the pair in their usual style set out and made all the running, however it looked at one point the runner up River Frost was going to claim the trailblazer two from home, but Frank drove her mount out close home and hold on. River Frost ran another consistent effort in second under Joe Wright and make it four seconds this season, whilst Monsun Storm was back in third for John Dawson.

The Veterans race would give John Dawson a double on the day as the Cherry Coward trained Path To Freedom stayed on strongly close home to beat the early pace setter Pillowman and Christy Furness, a better jump at the last sealed it for Dawson and the pair came home a length and half clear to win and justify his short price. The Mobile Man ran another good race in third under Lois Teal. 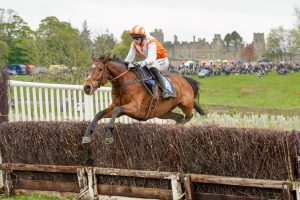