The Middleton Point to Point Review
This weekend Sheriff Hutton played host to the Middleton Point to Point which staged the prestigous Grimthorpe Gold Cup and the point to point also recently celebrated 100 years of the meeting. Local trainer Jack Teal was on form with a double and is currently on the side lines through injury, therefore Jack Power took the rides and extend his lead in the Men’s Novice Championship and record his first career double.
The first of a quick fire double for Teal and Power came in the 3 mile Open Maiden courtesy of the Steve Knowles owned and bred Desjay, showing a greater apreciation for the better ground Jack Power and his mount led from flag fall and had only the attentions of Lepashe and Paddy Barlow to fend off, however after a monumental blunder at the last and an amazing recovery from jockey Paddy Barlow the pair had to settle for second, whilst Desjay came home 10 lengths clear. Mind The Windows ut up a much better effort in third under Will Easterby. The brace of winners would take Teals tally to 8 for the season and already matches last years best record.
The second victory came in the 2m 4f Maiden for 4, 5 and 6yo’s with Macavity, a son of Fountain Of Youth who is better known as a top class sprinter when with Aiden O’brien. The runner up Paris Cercy and Macavity were gifted the lead after leader Rebel Monarch exited with a circuit to go and the pair duelled it out up the run in with the Jack Teal trained Macavity coming out on top for owners The Sigsworth Partners. There was a long gap back to Miss Buttons and Jess Bedi who showed promise back in third.
A horse thats rapidly on the improve is Ask To Dance who took the Cooper Family Conditions race, partnered by Will Easterby the 6yo son of Ask powered clear after the last and beat long time leader Fairy Mix under Lilly Frank who was running her best race for some time, whilst Path To Freedom struggled to land a blow but was close up in third for John Dawson. Ask To Dance was making it three wins on the bounce this season and could take his chance in the Heart Of All England Hunter Chase in May and could be one of the likely favourites if doing so.
The big race on the day was the Grimthorpe Gold Cup and was a renwal of last year as old rivals Cup Final and Point The Way lined up once again. It was a real battle to the line as the two market rivals fought it out up the run in, however Point The Way was not going to let last years winner Cup Final out of his sights this time and realed him in near the line to win. It has been a busy season for Point The Way who was last seen lining up in the Cheltenham Hunter Chase where he pulled up. A great effort came from The Mobile Man back in third who has put up some great efforts since a long break.
A very deserved win came in the Restricted race as the 10yo Barrack Hill battled on well to beat the youngster Cullin Hills. Partnered by Will Easterby Barrack Hill made most of the running but had a sustained challenge from Cullin Hills and Paddy Barlow who surely blew her chances by hanging on the bends, however to her credit she chased the winner all the way to the line with Barrack Hill coming out on top by three lengths for trainer Jon Barlow. The winner was having his second career win after winning a maiden in Ireland, whilst the runner up looks to have plenty to offer if honing her ability.
The opening Hunt Members race saw Rosie Howarth take the lead in the National Ladies Novice Title as Tom Cody took up the running five out and with his only other two rivals departing on the final half circuit, he was aloud to come home in splendid isolation after the last and make it four wins for the season.
Another easy victory came in the Oriental Club Owner-Trainer race as Lily Frank steered her very talented Vent d’Automne to success trained and owned by her fther Paul Frank. The pair blazed a trail from the front and never looked like been caught after their main rival Rossderrin blundered badly and unseated at the fourth, this aloud Frank and her mount to come home and win easily, Last Encounter completed for second but was well held 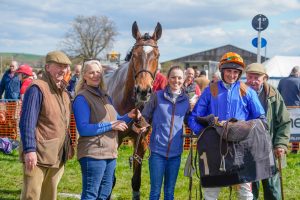 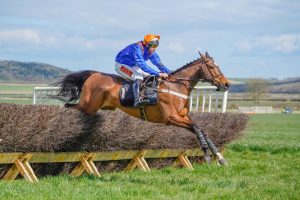