This weekend the Badsworth and Bramham held their point to point at Askham Bryan College, a six-race card was enjoyed in glorious sunshine with ground described as good. The jockeys in form on the day were John Dawson and Rosie Howarth who both continue to strengthen their leads in the Yorkshire Area titles, whilst Howarth now holds a strong chance at winning the National Novice Lady title.
John Dawson scored the first of three winners on the day in the Conditions race, where he partnered the Fiona Needham trained Sine Nomine to win her fourth race of the season. The winning pair had to work had though, as Slievegar looked to hold the advantage coming to the last, however a strong ride from Dawson saw him and his mount prevail close home “nothing really suited her today, class got her through it” said John, who has partnered this progressive daughter of Saint Des Saints on all four of her victories, Slievegar was second, whilst The Mobile Man was back in third under Rosie Howarth.
John quickly followed up in the Restricted race, again for the Fiona Needham and Robin Tate stable, with Teescomponents Boy. The pair were a well held third two weeks previously, however benefited greatly from this return to a sounder surface and easier track, the pair had to work exceptionally hard though to fend off the Joe O’shea trained Williewonga, partnered by Henry Crow “this track suited him alot better and hopefully he can keep improving” said Dawson and goes further clear as Men’s Champion in Yorkshire. Imperial Imp ran well back in third under Joe Wright and he could be better suited to a stiffer track.
The Men’s Open saw an effortless display from the Chris Dawson trained Steely Addition, formerly a talented recruit for Phil Hobbs this winning son of Craigsteel has bounced back to form for the switch to pointing. Partnered by Chris’s brother John, Steely Addition went effortlessly clear of his rivals up the straight and win easily “we might run him in a hunter chase and then think about Stratford but we’ll see how he is, he’s hardly had a race the last twice” said trainer Chris who was in no rush to make any immediate plans for his smart recruit. Wonderoftheworld completed for third under Henry Crow.
The Open Maiden had the largest field of the day with 14 runners and it would go the way of the Shropshire based trainer Rhiannon Lodge with Black Aphrodisiac. Runner up on her only three efforts the winner was finally getting off the mark at the age of 8, partnered by Henry Crow the pair stayed on well to beat long time leader Whostosay and Ross Wilson, whilst El Tornado showed a marked step up in form to be third under the in form John Dawson.
The final two races would see a quick double for leading Lady rider Rosie Howarth, the first of which came in the Ladies Open with the Cherry Coward trained Royal Chant. Their task was made much simpler as Skipping On departed at the eighth fence and this left Royal Chant to come home in splendid isolation. McMurphy eventually came home to finish second for Lois Teal.
Howarth also went on to take the Novice Riders race aboard her own horse Rossderrin, the pair made a smooth effort to lead three out and with her main rivals departing at the second last her task was made a great deal easier and was aloud to win by an easy 17 lengths, Acdc chased her home in second and made a pleasing point debut, for his young jockey Holly Thomson, whilst Cogryhill completed for third under Bella Higham. 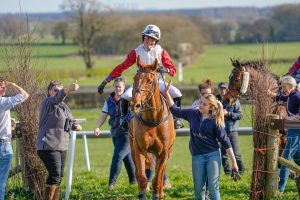