The Yorkshire Jockey’s Club are a newly formed group of current and former young amateur
jockeys who have come together to stage a point to point at Charm Park near Wykeham. The meeting
was a huge success with a huge crowd and runners arriving from up and down the country, the meeting
was staged in aid of Racing Welfare and the Injured Jockeys Fund which support the racing community
in the local area, many will of heard of Jack Berry House has which is funded by the Injured Jockeys
Fund and also helps provided rehabilitation to people in the Malton area.
There were two stars on show on Sunday, the first was Feuille De Lune partnered by Alice
Stevens, the pair sat behind the leaders and with a circuit to go they quickly established a strong lead
and galloped well clear in impressive fashion and win by 40 lengths for trainer Kelly Morgan, Mammoth
was well back in second under Gina Andrews. It was another breath taking display from the winner who
won in by far the fastest time of the day and bigger and better things look to be on the horizon “it was a
dramatic journey up, which involved the lorry wheels coming off and having to shut the A1” said
connections but luckily arrived just in time.
The Ladies Open saw another top performer in Latenightpass piloted by Gina Andrews, last
seasons Cheltenham fourth and Aintree Foxhunter second made light work of this field as they pulled 18
lengths clear and justify his very short price. Game As A Pheasant ran another hghly consistent race in
second under Rosie Howarth, whilst Demain des L’Aube and Lottie Crane was back in third. Bigger
targets could be on the horizon and although he does not hold an entry in the Cheltenham Foxhunter, he
may well head back to Aintree in an attempt to go one better.
Another tearaway winner came in division 1 of the Open Maiden with the 5yo mare Cullin Hills.
Partnered by Paddy Barlow the winner went to the front three from home and went well clear on the
bridle to win officially by the length of the run in, the Dowry who led for a long way was second under
Jack Teal and these were the only two finishers. This daughter of Millenary was bought from breeder
Chris Dawson and Nunstainton Stud last August and after a bumpy start looks as though she could have
a bright future “we always thought she would be capable of winning but that looked quite good…she got
called a few names to start with, but after her second run we found she had some major issues with her
teeth…Ben Woodhouse came and sorted them out and its transformed her!” said trainer Will Milburn,
who will now send his charge to Ascot sales at the end of this month.
Another welcome winner came in the Restricted with the Will Easterby trained and ridden Ask To
Dance, the pair collared the strong travelling Teescomponents Boy on the run to the last and stayed on
strongly to win. It was a fittig success for the winning pilot Will Easterby who is also Clerk Of The Course
for the newly formed Yorkshire Jockeys Club meeting “alot of work has gone into getting the course into
the fantastic condition it is in…we’ve learnt alot from John Swiers and his team who put alot of work into
this track every year” said Will. Ask To Dance is in his second season and broke his maiden during
Covid at Witton Castle, after a slow start to the season he looks as though he could progress further.
The Thoroughbred Breeders Association sponsored 4yo Maiden race saw 5 runners go to post
with the Tom Ellis and Francesca Poste yards fighting out the finish. Holy Joe Smoke would get the
better of the argument under Gina Andrews for Tom Ellis, this son of Black Sam Bellamy made all the
running and readily fended off the challenge of runner Mount Bonete from 2 out with these two pulling
well clear of the third and the first two will no doubt be gracing a sales ring soon.
The Mens Open was a 3m 4f race and a trial for the Grimthorpe Gold Cup at the Middleton
meeting at Sheriff Hutton on the 3rd of April. An easy success would go the way of last years runner up
Point The Way who eventually sauntered clear of last weeks Alnwick winner Sartorial Elegance and win
by an easy 30 lengths. The winner is clearly in top form and a test of stamina will see him at his best, the
Grimthorpe and possibly some bigger hunter chase challenges could be on the horizon.
Division 2 of the Open Maiden was another relatively straight forward success as Socialiser
ridden by Joe Wright was pushed clear to win in good style, the winner was running only a week after an
eye catching third in a restricted at Alnwick only a week earlier. Second place went to Direct Drilling ad

John Dawson, with Elusive Secret and Rosie Howarth back in third.
The final race on the card was a rearranged Intermediate from the Askham Bryan meeting and
saw the highly progressive Sine Nomine pull effortlessly clear after the last to win impressively under
John Dawson, Cool Desire was having his second run of the day after unseating at the second in the
Mens Open, after passing the vet he was cleared to run and stayed on strongly to finish second, whilst
third was Ballydonagh Boy and Jack Power. The winner looks a highly progressive daughter of Saint Des
Saints and is starting to catch the eye of several high profile trainers and connections may have to resist
some tempting offers. 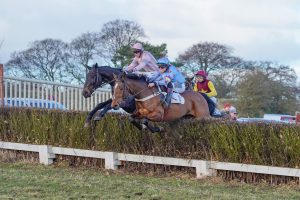