This weekends meeting at Duncombe Park was a massive success, with huge crowds and an eight race
card with some very competitive fields. It is not often that a horse rated 150 at his best turs up to a point
to point, however on Sunday there was two, both of which struck in fine style.
in the Conditions race Steely Addition was having his first run for Chris Dawson since 2016, when he
won a Maiden at the first time of asking, Dawson then sold the son of Craigsteel to Phil Hobbs where he
had a successful career and reached a mark of 150, however his form has tailed off over the last couple
of seasons and his connections returned him to Nunstainton Stud in a hope Dawson could rekindle his
form. The late jockey booking of Christy Furness prooved a successful partnership as the pair slipped up
the inside round the final two bends and score impressively. Chris was unsure what to expect from the
potentially classy pointer “I didn’t know what to expect, he was the class horse in the race, but he hasn’t
won for three years” said Dawson who hopes his charge can transfer his form to Open company with
Hunter Chases the aim later in the season. River Frost was making his point debut for the Brewer stable
under Joe Wright, whilst Monsun Storm was third under Chris’s brother John Dawson.
The opening Hunt Members race saw another useful recruit to the pointing sphere in Point The Way,
formerly a talented recruit when with Brian Ellison he has slowly recaptured the form of his younger days
including notching a brace of hunter chases last season. With the runner ups snapping at his heels up
the run in, four horses passed the post together but this 11yo stuck his neck to win “I was worried this
track would catch him out, it’s alot sharper now than it used to be” said his trainer Guy Brewer who felt
ability won the rce. Show And Go dead heated for second under Lottie Crane with Clondaw Anchor and
Christy Furness, whilst the fourth wasnt disgraced either in Gatacre Street only half a length further back.
The Restricted was the easiest winner of the day as Sine Nomine justified her odds on price and backed
up her Alnwick win last time with an impressive win over Barrack Hill and Paddy Barlow. Ridden by John
Dawson and trained by Fiona Needham, the daughter of Sain des Saints drew clear easily on the run in
to win eased down “she’s been a late maturer and has just taken a while for the penny to drop” said her
trainer and looks one who could quickly improve through the ranks. Barrack Hill was second whilst
Hilnamix was third.
The biggest celebrations of the day came from the Coward family as the Cherry Coward trained Purse
Price galloped on strongly to win the closing Flat Race for 4 and 5yo’s. Ridden by Rosie Howarth the pair
led 3 out and ran on well to win. Bought by Jacqueline Coward in the summer of 2020 it was hard to hide
their enthusiasem for this 5yo daughter of Passing Glance “we just love her, everyone rides her at home
and I think she’s quite nice!” said Coward who may opt to send this debutant winner back to the sales
“we might send her to the sales, but we wouldn’t be giving her away”. Second place to the Will Easterby
tained Is So Cute Dimaria under Lottie Crane, whilst Fascinating Rock was the gamble of the race under
Will Easterby but could never quite land a blow back in third.
Wounded Warrior was another formerly class act on show in the Veteran Horse Conditions race, trained
by Tom Ellis and ridden by Ellie Callwood this 13yo got his head back in front for the first time since
2018, this former classy recruit was third in the Royal and Sun Alliance Chase at the Cheltenham
Festival way back in 2015. Roycano looked to travel strongly under John Dawson in second but was
unable to quicken passed the winner in the final stages, whilst Peacocks Street and Dale Peters put up
some good efforts in hunter chases last year but could only manage third here.
The Mixed Open saw Jack Teals Matts Commission get back on the score board and take his career
tally to 9 wins between the flags. Matts Commission survived a bad mistake three from home but led in
the final 75 yards and showed a gutsy display to hold off a renewed challenge from Kilkishen who was
returning to form after a laclustre run at Sheriff Hutton, whilst the ever consistent Game As A Pheasant
was having his sixth run of the season and was narrowly back in third under John Dawson.
The Open Maiden was split on entries reulting in two divisions, both would go the way of the southern

raiders. Division one went to Go Go Geronimo and Tom Chatfield Roberts, the pair were always to the
fore and had only the strong effort of En Couleur to fend off, whilst Lockdown Ludo was 20 lengths back
in third. It was a much deserved victory for the winner after eight consecutive placed efforts in Maiden
company “he really deserved that” said connections.
Division two was an impressive display from The New Kid and Dale Peters who scampered away in the
straight to win by 30 lengths at the 13th time of asking, a leg weary Wireless Operator was second under
Gina Andrews, with another 12 lengths back to a tired The Whistle Blower and Paddy Barlow. With
showers through the day the ground turned to soft and became quite testing towards the end of the card. 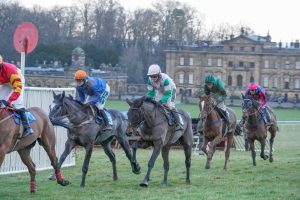