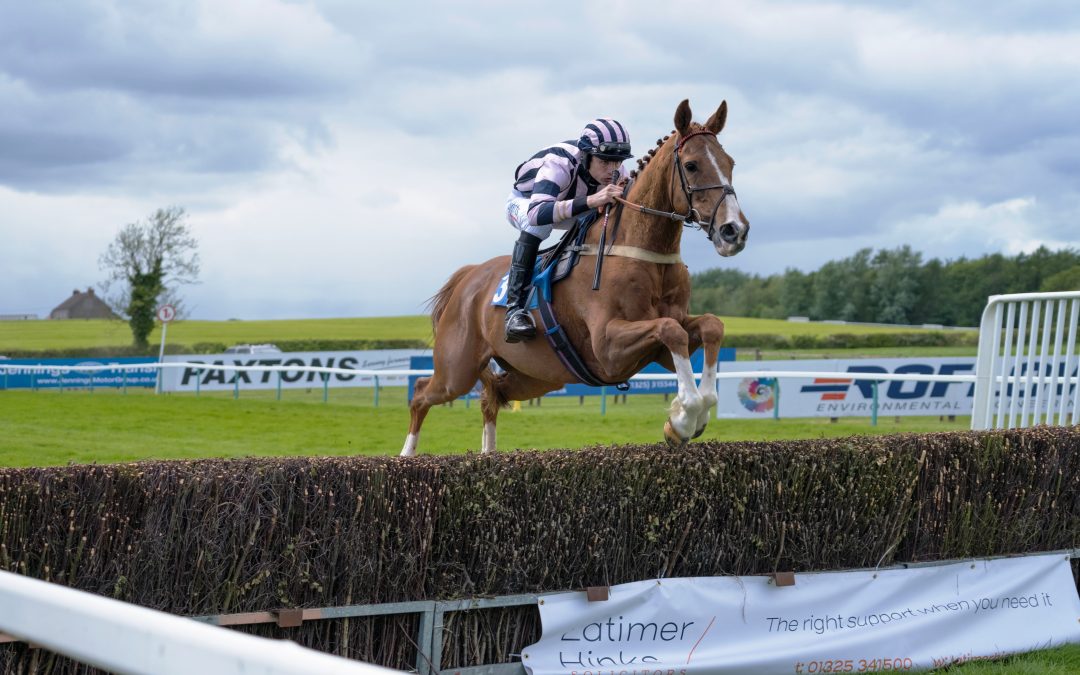 The South Durham point-to-point at Sedgefield Racecourse is the final meeting of the season in the Yorkshire Area on Bank Holiday Sunday, 26th May 2019. First race is at a later time of 3pm. Gates open at 1pm. Food and drink is available all day and after racing entertainment. Admission tickets £12.50. Under 12’s go FREE! Tickets available to purchase in advance at sedgefield-racecourse.co.uk or on the gate. The postcode for Sat Nav is TS21 2HW.
Please be aware that dogs are not allowed at the Racecourse.
The opening race is a 2m 4f open maiden and with only five entries Chris Dawson holds a strong hand with four of the entrants. Good Rhythm is the most experienced of them and was second last time at Easingwold, Smart Seb ran a cracking race to just be denied in a short maiden at the Pendle Forest and could improve further, whilst he had Foster’s Island behind him that day in third on debut and is likely to improve further. The southern raider is likely to be Franchel from the Tommy Morgan yard, he finished down the field in a point to point bumper and will be interesting to see how he takes to fences.Selection – Good Rhythm
The next race is a Hunt Members race and again Chris Dawson holds all four entries and will no doubt have claim a victory with anyone of these, Sposalizio holds an entry in the Men’s open and may also head to Cartmel on the Wednesday, Sweetsingingriver has only recently joined Chris and although she has shown little could be a good chance for her to increase her paddock value, whilst Fiasco hasn’t looked like showing any form this season and Good Rhythm also could contend.Selection – Sweetsingingriver
The Mens open looks a very competitive race with several useful recruits from this season, Path To Freedom has looked one of Yorkshire’s leading open horses this year but found Cheltenham all too much when taking on the Foxhunters winner in the Timico final last time. Snow Castle has run well at this track but looks to be best suited to a test of stamina and could find things a bit sharp here, whilst one who will enjoy the course is BadBad Leroy Brown, he beat some useful rivals at Thorpe Lodge last time in a Mixed open and if employing his front running tactics may not be caught round here. Dark Mahler was no match for the useful Maxwell import at Southwell last time but has showed a classy turn of foot in points and should be suited here, Game As A Pheasant although in good heart and on an upward curve may find one too good here, however Jack Andrews could also have the option of Wizadora who came out of the clouds at Witton Castle to beat fellow entrant Winged Crusader who walked over at Hexham recently. One that is most interesting is Shepherds Cave, his versatility is impressive as he went from winning an Easingwold Confined to scoring over 3m 5f at Heslaker, he is said to be best going left handed the leading PPORA novice horse in Yorkshire could take the beating. Selection – Sheperds Cave
The Ladies Open looks like it could be a match up between Winged Crusader and Wizadora once again, the latter came out on top last time however she was outpaced early on and came with a strong finish and wouldn’t want to get too far behind here and the placing’s may be reversed this time and Winged Crusader has a 4lb pull in the weights. Abbeyview although decent, was swept aside by Iron Chancellor at Hexham last week and may have to settle for a runner up spot once more, whilst Argot should be ideally suited round, his best results have come over shorter trips and its hard to read much into his recent victory where he finished alone.Selection – Winged Crusader
The Restricted does not look overly strong however it still looks an open race, Charles Brown looks the obvious choice as the only time he has completed in points he has won, however his jumping is extremely suspect with five out of his six starts resulting in a fall or unseat. Unseen was a winner at Charm Park last year and is recent third was respectable and may be a safer choice, Secret Pattern was gifted his Hunt race but showed some improved form next time to be fourth, whilst Nine O Three is an Irish point winner back in 2018 but has showed very little in his efforts under rules for Micky Hammond and may find a couple too strong even in this low level race.Selection – Unseen
The final race on the Yorkshire season is a Confined and the recent Easingwold winner Buck Dancing looks much more at home in points and won with ease last time, the same can be said for Royal Chant who has looked equally as impressive in his victories but is held by Buck Dancing on form after finishing third to him at Sheriff Hutton, however he is highly thought of by conections and could improve further. Badbad Leroy Brown looks to hold obvious chances along with Snow Castle who may find this easier than the open, however Sheperds Cave and Game As A Pheasant are in excellent form, they both must shoulder some lofty penalties for their victories and may be better suited off level weights.Selection – Buck Dancing