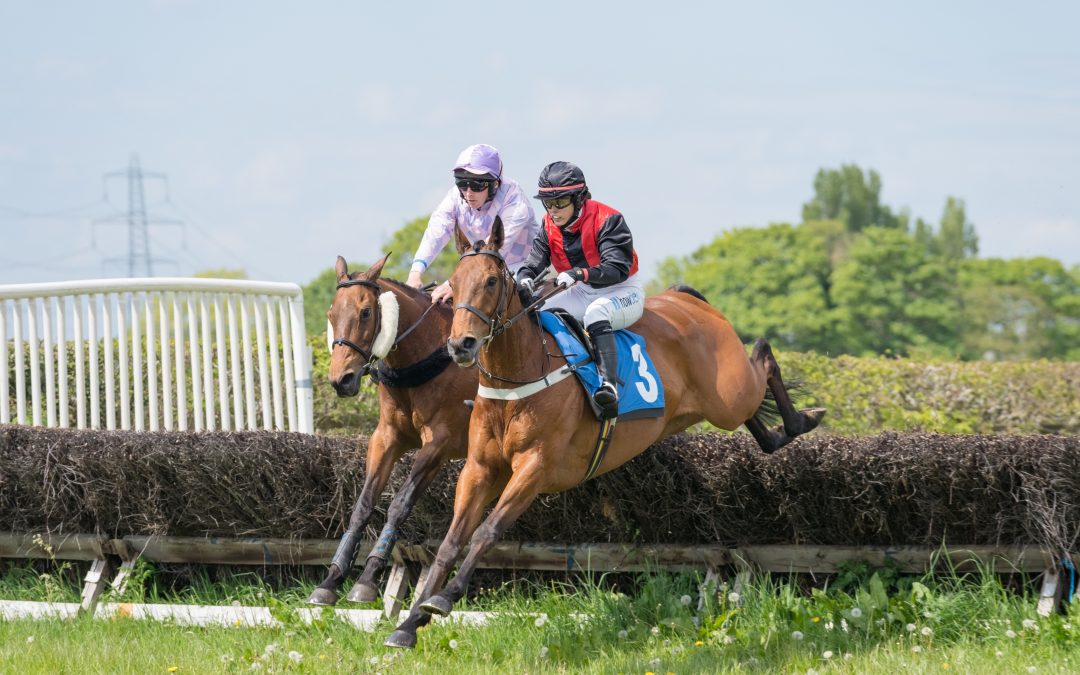 Last weekend we travelled to Easingwold point to point where the Bilsdale hunt held their meeting and what was a superb day, the meetings team had also put a huge amount of effort in to the ground with the track been watered all week, even with some heavy showers “the window wipers were going on the tractor and we were still pouring it on…it soon dries up” said Phil Clark who has helped with this track for many years. The girls were in form at the meeting with Jess Bedi notching up her first double and another first timer came from Bella Sowray who trained his first winner in the opening Hunt Members race.
The Hunt race had three runners from the four entries and it turned out to be a real battle from the two market leaders French Seventyfive and Forgivienne, the latter piloted by Will Milburn looked to have the upper hand turning from home, but a determined effort from Jess Bedi and French Seventyfive saw the pair get to the lead close home and win narrowly giving trainer Bella Sowray her first winner, Forgivienne was game back in second. Bella has only run her winner twice with him finishing second at the previous meeting after buying him a month ago “Gill Boanas put him on facebook one morning…I woke up, saw it and said I’m gonna buy that and win the Bilsdale Hunt race” said Bella who has done just that. A light approach to training appears to have rejuvinated the veteran who was a former winner at the track many years ago “I only canter him twice a week at the Walford’s and then hack him up the hills, everyday is different for him” continued Bella.
Jess Bedi would notch up a quick fire double in the second race, a Conditions race with her own Buck Dancing and take her one win clear in the national novice title. Buck Dancing led turning for home and was always going easily with only the efforts of Jack Teal and McMurphy to fend off back in second, whilst northern raider Pyjama Game was further back in third. Buck Dancng was putting a disappointing effort in the Heart Of All England behind him “I’m not sure why he ran so badly at Hexham, he was jumping and travelling well when he unseated me at Catterick, time will only tell how he continues to run” admitted Jess of her progressive 10yo who seemed to never travel or jump very well in a Hexham hunter chase.
The Open Maiden saw no more fitting a winner than Canizay piloted by Andrew Glass who was having his final ride before retiring, the pair led from the word go and stayed on strongly after the last fend off the staying on Epson Roque and Jack Teal, whilst Goody Hallett was only narrowly back in third under Ross Wilson. The winner was backing up a creditable second at the track only two weeks previously and has taken to pointing well after failing to show any promise on the flat for Roger Fell. Andrew Glass was recording his 26th and final winner at the age of 29 and had his first ride at the age of 16, but a lack of rides and continuous weight management has made him call time on his career.
The Ladies Open saw an effortless performance from the once talented Seafood under Lottie Crane who was last seen departing at Beecher’s Brook in the Aintree Foxhunters, so Easingwolds fences were a  walk in the park for this Leicester hunter chase winner. The pair eventually cruised clear up the straight and win with his head in his chest, with early pace setter Major Ridge coming home in second under Rosie Howarth, whilst Nosecond Chance put up yet another good effort back in third for Kate Lowcock. A tilt at the Ladies final at Stratford is now on the agenda for the 12yo “we wanted to run him here to qualify for Stratford, I thought he’d jump them quite big but he just hurdled them, he’s a total legend!” said Lottie who hopes next year he can contest more hunter chases or may have an easy life between the flags.
The Mens Open saw the Chris Dawson trained Sposalizio take his career tally to 13 after an easy win over Danny Maggs and Ross Wilson, with Massini’s Lady under Connor Wood in third. It was an emphatic success from the winner steered home by Tom Strawson and he always seems to come in to his prime at this time of year “he’s a tough and hardy horse, he goes on this quicker ground when the better ones don’t…he might head to Cartmel now for a hunter chase” said the winning trainer.
The penultimate race was the Restricted and saw an easy victory from Starlight Court under John Dawson who easily came clear of last time out winner Dressedforsuccess an Rory Bevin, whilst there was a long gap back to the third Erica’s Dream and Amy Collier who were a winner at this track last time. The winner holds an entry at Doncaster Sales towards the end of the month and surely can progress after this easy success.