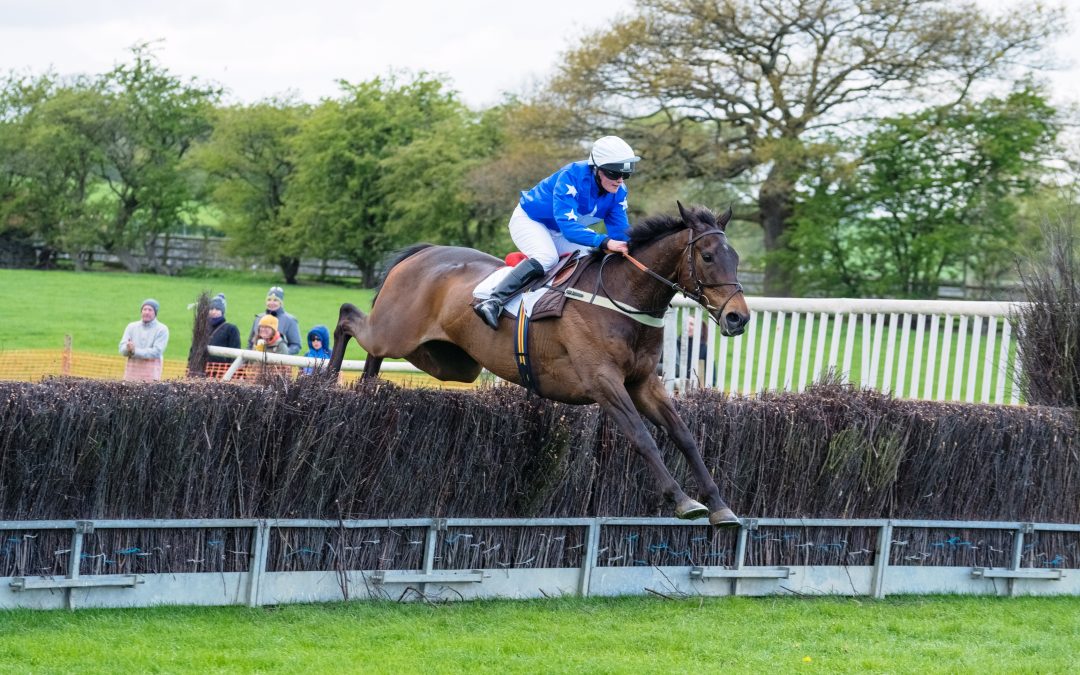 The Pendle Forest held their meeting at Heslaker on Saturday and it was a good turn out for runners, the meeting had been well watered and had resulted in good ground. The highlight of the day was the 3m 5f Mixed Open and saw the progressive Sheperds Cave take another step forward and beat some useful rivals.
Jack Teal’s progressive Shepherds Cave took the feature race which was run over the extended 3m 5f, it was a fifth win for the son of Courtcave who stayed on well to beat last years John Corbett Cup winner Garde Ville by a length and a half, third place went to former Grimthorpe Gold Cup winner One Conemara and John Dawson. This continued to show the versatility of Sheperds Cave after he won at Easingwold the previous week and has now won over the extended trip on a stiff track and races such as the Grimthorpe Gold Cup must be on the agenda next year “he never has a blow in him, he finds it all easy, it’s amazing really” said John Teal father of Jack. Jack then made a quick dash up to Hexham along with fellow riders Rory Bevin and John Dawson to take part in the Heart Of All England, Teal would go on to win the Heart aboard the Tinkler trained Hafajay.
One person who was riding and training her first winner was Rosie Howarth in the Novice Riders race aboard her own Major Ridge, the pair stayed on well at the end to beat Alta Rock and Clues And Arrows and the winners task was made easier when short priced favourite Duke Arcadio was pulled up with a circuit to go. Previously a winner under rules for Micky Hammond, Rosie purchased Major Ridge from Lynne Ward in April and this was his third run “he certainly benefits from me doing everything with him and he’s really settled in to the quiet farm life” said Howarth who aswell as working for trainer Roger Fell helps out on the family dairy farm.
The opening race was a Conditions race run over 2m 4f and it was the win this season for Oscar O’scar who had Doeslessthanme for company approaching two out but the Kate Lowcock ridden 11yo was always going best and eventually edged clear of the formerly useful 15yo Doeslessthanme under Emma Todd but ran another gallant race in second, third went to Raleagh Mountain and Rory Bevin. It would be the start of a good weekend for Kate Lowcock who is currently leading the Ladies championship and Novice Championship in Yorkshire.
The Open Maiden went the way of the Simon Edwards trained Wingin A Prayer who battled it out with the Chris Dawson pair Smart Seb and Foster’s Island, ridden by Huw Edwards the winner just got on top of the pair after the last and put his previous experience to good use and stuck on well to win at the third attempt, second was Smart Seb and To Strawson, whilst Foster’s Island was piloted by John Dawson.
The Conditions race was for 5yo and up and went the way of the Rory Bevin ridden Templepoint trained by his mother Louise Bevin, bought last year at Doncaster’s May sales Templepoint has been relatively consistent in Restricted races and took a big step forward on previous form to win in very easy fashion here, second went to Royal Deal who was renowned for his lackluster antics in Yorkshire, whilst further back in third was a disappointing Nautical Twilight who may have found this track too stiff and could do better on a sharper track.
The final race was the Hunt Members race and again went to the 15yo Forge Valley who was winning the race for the third time under Tom Greenwood, the pair pulled readily clear of his sole rival Lauberhorn and the only other contender Windy Writer unseated mid race.